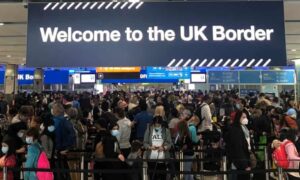 European nationals are now permitted to travel to the United Kingdom after the latter announced it would put an end to its colour-coded system, which has prohibited and discouraged travellers from several European member states to visit the country.

The European countries welcomed the news, hoping the move will also have a positive impact on the tourism industry in Europe, which has been significantly affected by the pandemic. Moreover, the tight entry restrictions and the weekly updates on travel rules to specific destinations left millions of Britons confused on whether they should plan to spend their summer vacations in the EU or not.

Throughout most of the summer, arrivals from the EU have been obliged to undergo quarantine and testing requirements returning from the amber list countries, in which the majority of European countries were added, SchengenVisaInfo.com reports.

Travellers from Europe who received the final vaccination injection at least 14 days before travelling to the UK can enter the country without self-isolating upon arrival.

However, they must book, pay and take a COVID-19 test within 48 hours after reaching the country and provide the completed passenger locator form, required to be presented within the same time frame as the COVID test.

Vaccine shots and combinations of them approved by the British authorities include the following:

The entry requirements apply only to vaccinated travellers coming from the green list countries, as the following list indicates:

The same entry requirements apply to travellers from Croatia as the county is also placed on the green list. However, according to the press release issued by the British government, there is a risk for Croatia to be removed from the category.

Moreover, partially vaccinated travellers and those immunised with different vaccines from those mentioned above are considered unvaccinated. Thus, they must follow the requirements imposed for the unvaccinated category.

What Entry Restrictions Are Travellers From Amber List Countries Subject To?

Vaccinated and unvaccinated European travellers reaching the UK from amber list countries have to take a pre-departure test three days before travelling to the UK and provide the passenger locator form within the first two days of arrival. Moreover, they must book, pay and take another test on day two and day eight upon arrival.

Vaccinated travellers have to perform a COVID test on or before day two of arrival, whereas those that haven’t been vaccinated have to quarantine for ten days and take two COVID tests; one on day two and the other one on day eight of quarantine.

The quarantine can be ended early if the traveller decides to undergo a private COVID-19, at their own expenses, through the Test to Release scheme.

European countries on the UK’s amber list include the following:

Currently, the UK’s red list includes no EU member states, which means the European travellers can travel to the UK free of a ten-day quarantine requirement imposed on red countries arrivals.

To facilitate travelling amid the pandemic, the EU has implemented the EU Digital COVID-19 Certificate, a standard document indicating that the holder was fully vaccinated, recovered, or recently tested negative for the virus.

The UK also has its version of the document known as the National Health Service.

Although the UK recognises the vaccination administered in the EU countries as valid and allows vaccinated travellers to enter the country quarantine-free, it hasn’t officially recognised the EU Digital COVID-19 Certificate yet.

Previously, the UK government made an application to connect the EU’s digital certificate, but the European Commission refused to approve it since it required extra technical information.

The World Health Organisation (WHO) data shows that EU countries have registered 133,397 positive cases with COVID-19, raising the total number of positive cases to 68,568,504 since the pandemic started.

Starting from October 4, the British government will end the requirement of pre-departure tests, which allows vaccinated European citizens to travel to the UK by presenting a cheaper purchased test and preventing quarantine requirements.

“From the end of October, eligible fully vaccinated passengers and those with an approved vaccine from a select group of non-red countries will be able to replace their day two test with a cheaper lateral flow test, reducing the cost of tests on arrival into England,” the press release notes also explaining the change will be introduced on late October as people return from their mid-term breaks.

Moreover, if the test comes out positive, the traveller must undergo a PCR test free of charge, which the government uses to detect new variants of the virus. Unvaccinated passengers from safe list countries must present a pre-departure test, undergo a ten-day quarantine and get tested on day two and day eight.

Furthermore, the British government has warned it will end the colour-coded system, classifying countries only in the epidemiologically safe or unsafe list.

“As global vaccination efforts continue to accelerate and more people gain protection from this dreadful disease, it is right that our rules and regulations keep pace,” Health and Social Care Secretary Sajid Javid said.

UK to quadruple quota for #MigrantFarmWorkers –...

More than a dozen migrants intercepted in...