Poland’s ambassador to the UK has written to 800,000 Poles advising them to “seriously consider” returning home and expressed concern about the application process for getting settled status in the UK after Brexit.

Arkady Rzegocki said while the process was straightforward, he was concerned. “Of course, we are concerned about this process a little bit, because there’s 42% of people who received pre-settled status,”he told BBC Radio 4’s Today programme on Wednesday.

He added: “So it means that there’s quite a lot of people who have had some problem with receiving settled status.”

He said many Polish people did not realise they had to register as they had lived here for many years. 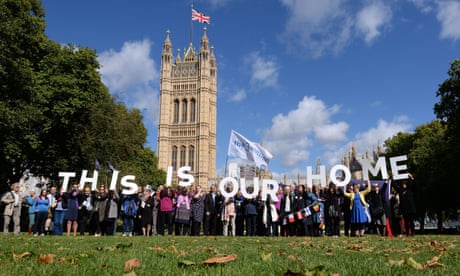 Applying for settled status is a fraught and humiliating process | Letters

“Even if they have resident status, they still have to register,” he said.
“There are quite a lot of problems with people trying to receive settled status. People who have been here five or 10 years have also had problems.”

The Polish ambassador had earlier written to his compatriots encouraging them to “seriously consider the possibility of returning to their homeland” post-Brexit. Rzegocki, who has represented Warsaw in the UK since 2016, said Poland “regrets” Britain’s departure from the bloc, scheduled for 31 October.

Office for National Statistics data showed about 832,000 people born in Poland were resident in the UK in 2018. Rzegocki wrote that only 27% of Poles living in the UK had submitted an application for settled status, saying this was an “alarmingly low level”.

He said: “I also encourage you to seriously consider the possibility of returning to your homeland. The rapidly growing economy of our country creates more and more opportunities for citizens for development and good living conditions in the country.

“Soon, Great Britain, which has been home to thousands of Poles for generations, will most likely cease to be a member of the European Union – which we regret, but we also see this process as an opportunity to strengthen the bond between our two countries.”

Rzegocki told the Today programme: “Poland and the Polish economy is growing, life standards are improving – they are much different compared with five to 10 years ago. I think it is a very good opportunity to come back to Poland. I think you can achieve your goals in both Britain and Poland.”

He said: “On one hand there is still a lot of time to apply, on the other hand because of Brexit it is better to achieve settled status soon.”

When asked how many Poles may choose to return home, Rzegocki said: “It is difficult to predict. Last year, 116,000 left the country. There are still about a million here but you can see there is a discussion being had. We are doing the best to keep our relationship as close as possible as there is a long friendship between our countries.”

New Report Underlines the EU’s Strategy in the War on Migration: Border Externalisation

Refugees to hand in petitions against ‘cruel,...