Majority of Britons do not trust government on immigration

The vast majority of people do not trust the government to handle immigration, while people are split over whether diversity has “undermined” British culture.

In one of the biggest surveys on attitudes to immigration in years, 15% of respondents said they felt the government had managed immigration competently, and just 13% trusted MPs to tell the truth on the issue.

A majority of people held a favourable view of migration, with 65% of respondents saying migrants brought valuable skills to the economy and public services, and 59% saying diversity is a good thing for British culture.

But suspicions and concerns about migration were also a profound concern for many.

A sizeable minority – 40% – said they believed having a wide variety of backgrounds and cultures undermined British culture, while 60% felt diversity was part of British culture.

The findings have prompted charities Hope Not Hate and British Future, which carried out the survey, to call for a national conversation on migration to rebuild public trust.

Sunder Katwala, director of British Future, told Sky News he believed people felt they had been “kept in the dark” about immigration, but that when asked had a “pragmatic mix of views about what they wanted to do”. 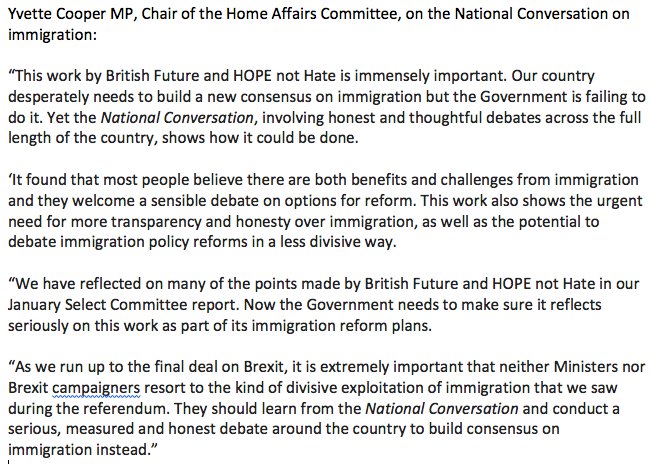 The majority of people surveyed were what researchers called “balancers” – people who believe immigration has brought both positive and negative impacts, and who want greater transparency and an open conversation about the issue.

Among the issues they raised were concerns about pressures on housing and public services, and fears that migrants willing to work for less would drive down wages.

“Our conversations revealed that immigration policy cannot operate in isolation from other policy areas, such as housing and education,” Rosie Carter, who co-authored the report, wrote in the Independent.

“Resistance to change is not only about a decline in welfare and opportunity, but these anxieties trigger a defensive instinct to protect and reassert a social position.”

She pointed to some of the report’s 40 recommendations – including tackling poor housing provision and increasing opportunities for migrants to learn English – as ways the government could support communities affected by immigration.

The report drew on the views of nearly 20,000 people using methods including a nationally-representative survey, an online survey and discussions held in local “citizens’ panels”.

People’s responses also varied widely according to where they lived, and people were found to express more extreme views online than in in face-to-face conversations.