International sports stars will be able to get fast-track visas to come and live in the UK as part of the government’s new points-based immigration system.

From October, professional athletes at the top of their game will be allowed to apply for a Global Talent visa, meaning they only have to make a single visa application instead of going through a lengthy endorsement route.

Before this, they would have had to either apply for a skilled worker or temporary worker visa which involves providing several different documents plus an immigration appointment. 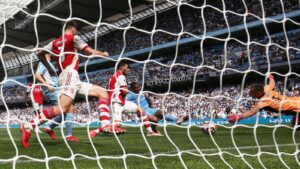 The Global Talent visa has so far only been open to people who have won prestigious awards from across the world of arts, culture, music, film, television, science, engineering, humanities and medicine.

The issue of whether many overseas football players would be able to play for UK clubs has been rumbling for months after the Brexit transition period ended on 1 January and Europeans then needed a visa to work in the UK.

But the government hopes adding sports stars to the list will solve that problem and the UK will yet again be able to attract the best sportspeople – not just footballers.

Home Secretary Priti Patel said: “We want to attract the world’s greatest minds at the crowning point of their careers, so the UK remains number one on the global leader board in sports, the arts, science, film and technology sectors.

International sports stars will still need an endorsement from a sports governing body and a certificate of sponsorship from a recognised club to be able to apply for the Global Talent visa, but the process will be much quicker and easier.

In May, actors, actresses and musicians who have won top industry prizes were added to the Global Talent visa list.

Included are music stars who have won a Brit Award, best international act at the Mobo Awards and Grammys lifetime achievement award winners.

UK talking to Ghanaian government about how it can help alleviate immigration problems, now-deleted tweet suggests

Editorial Refugees are our responsibility