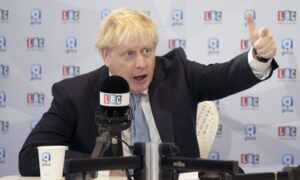 Boris Johnson has insisted there is no crisis in supply chains but admitted just 127 visas for tanker drivers had been granted.

Asked by BBC Radio 4’s Today programme if he believed there was a crisis, the prime minister said “no” and said difficulties were linked to the revival of the economy, calling it “a giant waking up”.

Johnson said the government had asked the road haulage industry to provide the names of foreign drivers who would want to come to the UK, and only 127 had been produced so far.

“What that shows is the global shortage,” he said.

The prime minister said a difficult winter of the petrol crisis, shortages on supermarket shelves and soaring energy bills were symptoms of the economic path the country was on that would tackle a long-term lack of productivity, low wages and under-investment in energy and infrastructure.

“This government is doing the difficult, long-term things. We got Brexit done, which was a very difficult thing to do, and we are now going to address the big underlying issues that face the UK,” he said.

Part of the problem was that businesses had been able to “mainline low-wage, low-cost immigration for a very long time,” Johnson said. ““I think actually this country’s natural ability to sort out its logistics and supply chains is very strong. But what we won’t do is pull the lever marked ‘uncontrolled immigration’.”

The prime minister doubled down on his insistence that disruption would be temporary but said it was part of the transition to offering more people better pay and conditions, saying drivers often had to “urinate in bushes” because the workforce was not valued by the industry.

“What you can’t do is go back to the old, failed model where you mainline low-wage, low-skilled labour – very often very hard-working, brave, wonderful people – who come in, working in conditions that frankly are pretty tough, and we shouldn’t be going back to that,” he told BBC Breakfast.

In broadcast interviews, Johnson defended the cut in universal credit, linking it to his drive to increase pay. “What we won’t do is take more money in tax to subsidise low pay through the welfare system,” he told LBC.

Johnson also criticised workers who had not returned to their offices, saying there were Downing Street staff still working from home.

He said young people who wanted to learn “can’t just do it on Zoom” and said they would be “gossiped about and lose out” if they worked from home. He said the cabinet secretary, Simon Case, had written to No 10 staff telling them to “get back to their desks”.

On Tuesday, the Conservative party conference will hear speeches by the justice secretary, Dominic Raab, and the home secretary, Priti Patel, who will announce tougher rules on community service and tagging criminals.

Johnson said he did not believe making misogyny a hate crime would be the right response to the murder of Sarah Everard. He said people’s main anger was about how existing laws were so poorly enforced.

“To be perfectly honest, if you widen the scope of what you ask the police to do, you will just increase the problem,” he said. “What you need to do is get the police to focus on the very real crimes, the very real feeling of injustice and betrayal that many people feel.”

Johnson said recruiting more female officers would help change the culture in police forces, after multiple stories about misogyny among officers that emerged in the wake of the sentencing of Everard’s murderer, Wayne Couzens, who was a serving police officer.

“In the Met now you are now running at 40%. That is a good thing. I want to see those officers progress up the ranks and attain senior positions and change the culture,” he said.

British pensioners moving to France: How to apply for a visa